Windrunners are one of the ten orders of Knights Radiant. They share Surges with the orders of Bondsmiths (Adhesion) and Skybreakers (Gravitation). The combination of these two Surges results in three separate powers which are known as the Three Lashings.[1] Further, Windrunners exemplify the virtues of Protection and Leading. Jezrien is the patron of this order.

In a vision experienced during a highstorm, Dalinar witnessed hundreds of Radiants - including the Windrunners - on the Day of Recreance, abandoning their Shardblades and Shardplate.[2]

The following may be related to Dalinar's vision:

This, too, may be related to Dalinar's vision:

The Windrunners' Nahel bond is with honorspren, who are inclined toward truth and justice. These spren can be killed, as can other spren, by those to whom they are bonded should they break their vows. Regarding this bond, the synergy between the behavior and the relationship is one of constructive interference - but it goes both ways. The desired behavior reinforces the budding relationship, and the strengthening relationship reinforces the desired behavior, and it's just not possible to have one without the other. But "constructive interference" can be a two-edged sword - when the results are undesirable, it's also known as a vicious cycle.

The glow of their Shardplate is blue.[2]

By the beginning of Rhythm of War, Kaladin has three generations of Windrunners numbering well over 100: his Bridge Crew being the first generation; their squires (many of which, from other bridge crews) the second; and theirs, the third. The majority of the first generation, and even many of the second have said their Third Ideal, but the third lacks the spren partnership required to make their words count, even if they are emotionally/mentally mature enough to say them. This is because the majority of honorpren are opposed to helping humans given their previous betrayal.[citation needed]

Szeth was able to use the powers of a Windrunner by bonding with an Honorblade (not with an honorspren) and without having spoken or embraced the Ideals.[citation needed]

Various members amongst the Fused.[10]

Windrunner oaths are themed toward protection, particularly defending innocents or those who are unable to protect themselves.

The Windrunners tend to attract "big sibling" types, who seek to protect the defenseless, but also enjoy action and fighting for what they believe in. They're primarily scouts, though they often work as special forces groups, able to deliver teams of Radiants behind enemy lines for secret missions. They tend to be the most like conventional soldiers, believing in structures of command, team dynamics, and the importance of a squad of brothers and sisters. They often have larger numbers of squires than other orders and focus more than any other order on mastering their weapons.[11]

Every Windrunner must speak the Immortal Words of the Knights Radiant, which are a set of rules by which Radiants live. The First Ideal, identical for all orders of the Radiants, is used as their motto. Each of the Radiant orders then had an additional number of Ideals that were unique to each order. For the Windrunners, these Ideals are as follows:

Also known as the Ideal of Radiance.

Also known as an Ideal of Protection.

Also known as an Ideal of Protection.

It was almost spoken by Kaladin while he was in Shadesmar after the fall of Kholinar, but he wavered as he spoke it for not being able to live up to the oath.[12] He finally did speak the Fourth Ideal after leaping after his father from a tower in Urithiru, which granted him his armor.[citation needed]

Windrunners' Resonance has to do with the number and power of each their squires.[14] (The divine attributes of Windrunners are Leadership/Protection, which fit their squires' protection.) 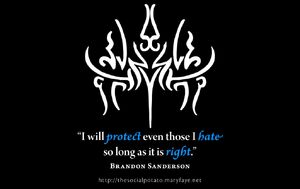 Q. For a Windrunner, if he had enough heating fabrials and enough Stormlight, how high up could he get?

A. You could exit orbit. Windrunners, remember they're gravitation and pressure. So if he knew what he was doing, we have actually factored how long it would take to get to the various moons.[15]

Q. Is the important part of the fourth oath of the Windrunners forgiving yourself?[16] Kaladin had to accept that it wasn't his fault for the people that died, and it seemed that Teft was going down a similar path.

A. Yes. I can expand on this one, it doesn't mean that every one of them will take exactly the same shape, but that is a major component in that oath. Speaking those words involves that for most Windrunners. How about that?

I like the oaths being a little more flexible along those lines, just because they work for more people that way. I like that the oaths express the individuality of the person, and the specific things that they are working on, and getting better at, and learning through the process.[17]