Skybreakers are one of the ten orders of Knights Radiant. Skybreakers share Surges with the orders of Windrunners (Gravitation) and Dustbringers (Division). The Herald Nale is the patron of this order.[1]

The order's focus is upholding the rule of law, regardless of whether it is just or fair, and thus has gained a reputation for being particularly unyielding. Skybreakers will obey the laws of a land regardless of whether it aligns with their specific goals, and if pursuing a target will only make an arrest or perform an execution if there are legal grounds for it under the laws of the land in which they happen to be.

As stated above, the Skybreakers had considerable abilities for quelling disturbances amongst rival entities which amounted to almost divine skills.[2]

According to Nale, the other orders of Knights Radiant always did consider themselves beyond the reach of the law. That only the Skybreakers ever understood the importance of boundaries. Of picking something external to oneself and using it as a guide.[3]

As part of their training, the squires are responsible for killing or capturing criminals. When Szeth kills a fat nobleman, he tells Master Ki - who agrees with him - that he's killed the worst of them.[4]

In a test of martial competence, the squires train using pouches bearing powders of different colors as their only weapons. These have been placed atop poles so that one must use Lashings[5] in order to reach them. One loses four points for each different color on his/her uniform, and an additional point for each repeated hit from a color. The winner is the one who has lost the fewest points.[6]

Notably, the master said that only color on the uniform would be counted, so holding the pouches and dusting one's own fingers is fine. Similarly, hitting each other in the face gains no advantage.[6]

Trainees take quickly to the game, and pouches then are flung in all directions. Each pole bears only a single color, encouraging competitors to move about to hit others with as many colors as possible.[6]

They would chase an isolated squire, swarming him or her with a flurry of eight pouches, often scoring six or seven hits while rarely getting hit themselves.[6]

Skybreaker oaths are themed toward justice, fighting for causes, and enforcing social rules. They generally reinforce the importance of moral codes, legal structures, and similar boundaries that protect civilization.

The Skybreakers were the enforcers of the Knights Radiant, often tasked with keeping the peace, policing the other orders, and making certain that dangerous or dark forces in the world were contained. This sometimes gave them a bad reputation among the more free-thinking orders of Knights, but the Skybreakers (at their best) were not merciless. They were the ones who believed that nobody, not even a Radiant, should be above being questioned. They were the ones that did the sometimes tough job of making certain that the orders didn't abuse their power to become tyrants, as the Skybreakers saw that those with powers could easily oppress those who had none.

They tend to attract those who believe in the importance of legal code, those who have strong moral codes of their own, and those who think the best defense against anarchy are things like patriotism, moral fiber, and rules to govern behavior. Note that the current incarnation, led by the Herald Nale in his madness, is more rigid than the ancient order, which understood that the law was not perfect, but instead represented an ideal to try to reach over time. Anyone believing in finding true justice, in defending the innocent, and in punishing the guilty would be welcome in the order.[11]

The Ideals of the Knights Radiant, also known as the Immortal Words, are a set of rules by which the Radiant lived. The First Ideal, identical for all orders of the Radiants, is used as their motto. Each of the Radiant orders then had an additional four ideals that were unique to each order.

Also known as the Ideal of Radiance. 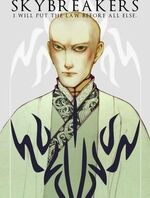 Called the Ideal of Justice, this is a specific oath to seek and administer justice.[7]

Called the Ideal of Dedication, this is a specific oath to dedicate oneself to a greater truth. A Skybreaker squire must first bond their highspren before taking this oath, and it is the minimum oath required before the Surge of Division can be used.[7]

This Ideal is also called the Ideal of Crusade, and requires that a Skybreaker undertake a personal quest and complete it to the satisfaction of their highspren. Once completed, the Skybreaker is elevated to the rank of master.[7]

Called the Ideal of Law, it requires a Skybreaker to swear an oath that s/he will become a personification of law and truth. Nale is the only current Skybreaker to have achieved it - and the only Herald - as it has been centuries since anyone mastered the Fifth Ideal.[7]

There is disagreement within the order on whether this means that a Skybreaker swearing this oath can do anything - as they are a personification of law and truth - or if they need not break any law to keep their oaths. Depending on each Skybreaker's perception of the Ideal, either interpretation could be valid.[13] After swearing the Fifth Ideal, a Skybreaker is no longer required to follow the Third Ideal to which s/he initially swore.[10]

Skybreakers were first revealed by Brandon in a Q&A.[15] When the order was founded and took Nale as their Herald, Nale initially refused to take patronage of it. It was some time till Nale agreed to this.

Prior to his death, Helaran was suspected to be investigating the Skybreakers.[16][17]

Q: Are the Skybreakers kind of like the MPs of the KR?

A: Yes. That is actually a really good analogy.