Renarin Kholin is a Brightlord of Alethkar, Prince of House Kholin, and the younger son of Highprince Dalinar and Evi Kholin, and younger brother to Adolin. Through his father, he is the nephew of the late King Gavilar and his then wife and Queen Navani, the cousin of now Queen Jasnah and her brother, former King Elhokar. He is also a first cousin once removed to Elhokar's and his wife Aesudan's son Gavinor[1][2] as a member of House Kholin.

Since childhood, Renarin has supposedly suffered an illness referred to as 'blood weakness'.* Initially, he does not possess either a Shardblade or Shardplate. Adolin wins a Shardblade for his brother in his first serious duel,[3] as part of the plan to take Shards away from the other highprinces.[4] Renarin is given his father's Shardplate when Dalinar decides to turn over field command of his forces to Adolin and devote himself to leadership.[5]

Renarin has sapphire blue eyes.[6][7] He wore spectacles, but later stopped using them when his use of Stormlight healed his eyesight. Renarin is described as having a straight back, perfect posture, slender limbs, and delicate fingers.[citation needed]

When wearing the regular uniform of Kholin blue and silver, golden knots on his shoulders mark him as a prince.[8] When working with Bridge Four, he wears the trademark Bridge Four uniform.

When standing next to his father, according to Dalinar, Renarin looks even more spindly than normal, and though his hair isn't as blond as Adolin's, it is still patched with yellow. He seems such a strange contrast to Dalinar, cut from almost entirely different cloth.[9]

Renarin is a quiet person who is close to his brother but is dismissed by everyone else. He is shown to be quite thoughtful and intelligent but suffers from lack of confidence and depression. While these emotions are present within him, he is very good at controlling them, only showing what he wants, though usually nothing.[citation needed]

Renarin has no problem following orders, regardless of how silly they might be, and has a good attitude toward most things. He wishes to prove his worth to everyone but himself as he is unable to fight in a society that so greatly values war.[citation needed]

He is earnest, and doesn't display any of the spoiled temperament of his brother.[1]

He is humble and very brave, especially when his father or brother are in danger. When his father is thrown from his horse during the chasmfiend hunt, he runs to protect him, heedless of the danger he faces; since he doesn't have Shardplate, he could easily be killed.[10] He risks his life to save his brother in the dueling arena, when Adolin faces four full Shardbearers due to a loophole in the rules of dueling. Renarin doesn't have enough time to don his Shardplate, but summons his Shardblade and faces a fully trained, experienced Shardbearer, Abrobadar.[11]

He despises being weak, however. When he can finally start to exert himself after becoming a Radiant, he feels happy.[citation needed]

Renarin's voice is measured, controlled. He always pauses before replying to a question, as if testing the words in his mind. Some women Adolin knew said Renarin's ways made them feel as if he were dissecting them with his mind. They'd shiver when they spoke of him, though Adolin had never found his younger brother the least bit discomforting.[12]

He rides with a straight back and perfect posture, eyes hidden behind his spectacles, a model of propriety and solemnity.[12]

He wishes to be man who fights because it's what his father always wanted, though he admits that Dalinar may not realize it. He doesn't want to become an ardent or stormwarden because everyone else assumes he will be. Further, if he went and did it, he'd be giving in to what others have said about him. He is hesitant to do anything that would make him stand out from the other bridgemen, given that he thinks he's already the oddest one in the bunch. That he's always been the strangest one.[13]

Renarin isn’t defined by his relations with other characters. He is well loved by his family and wholeheartedly supported, sometimes overly protected but always cared for by everyone who is close to him. His father dotes on him immensely; his big brother is always there ready to defend him; there is no conflict to be had. Renarin isn't jealous of Adolin's successes. He has little fear of death (judging from his running unarmored into the dueling arena in a futile attempt to help his brother),[11] no jealousy, and he has no expectations of being treated in a manner befitting his princely status. He is willing to plead with Kaladin to be admitted into the Bridge Four fellowship in order to be useful, and gradually becomes accepted. As Kaladin later explains to Dalinar, as a 'misfit,' Renarin fits very well into his collection of such people.[citation needed]

Finally, he has a set of Shards, though the Blade screams every time he summons it - but since he's always been the weird one, he assumes that's just his own personal problem, too. On top of that, he's seeing the future - which is supposed to be a thing of evil in Vorin society - so he really doesn't dare tell anyone: his family has enough stress, the rest of Alethkar already thinks he's "icky" and he doesn't need to add "anathema". So, as usual, he bore it alone and tried not to be a burden ... but now it's all getting to be too much.[citation needed]

Renarin's little box, however, which he always has with him for no purpose other than something to do with his hands, is recognizable as a form of stimming (i.e., a symptom of autism).[14] Renarin's main issues thus seem to sprout mainly from himself. His ordeal appears to be a very internal one, a very private one. Nobody ever told him he absolutely had to be a soldier: it is quite the opposite. His family also tried to encourage him to pursue a path where they thought he would excel. In all appearances, the Kholin family has done everything right in trying to help, shelter and encourage this supposedly disabled child. [citation needed]

This makes Renarin’s hardships very personal, which are lived inside his head.[citation needed]

Renarin begins combat training later than most light-eyed boys, who begin at around age 10. He is chosen by the ardent Master Zahel, who starts Renarin's training in Shardplate by getting him to jump off the roof of one of the training ground buildings. Once Renarin has completed this task, he is told to do it again. "This time, fall headfirst!"[15]

In the days leading up to the Everstorm, Renarin began seeing visions of the future which caused him to write glyph messages and numbers counting down to its arrival. However, these writings were attributed to Dalinar's visions and assumed to be Dalinar's own manifestations while "under an influence". During the battle for Narak itself, however, Renarin was taken by one of his visions again, and his participation in them seems to be involuntary, if not painful.[16] Considering the Vorin sensibilities regarding men writing, it is possible that his writing of the glyphs are against his will also. Because he is seeing the future - an action explicitly forbidden by the Vorin church for ties with the Voidbringers - Renarin believes himself to be cursed by the Almighty.[citation needed]

Later, Renarin stops wearing his glasses,[17] presumably indicating he no longer needs them. It is likely that he used the Surge of Progression - or Regrowth - on his eyes.

At the end of Words of Radiance, Renarin is revealed to be a Truthwatcher, a type of Radiant whose Surges are Progression and Illumination. The spren with which he has bonded is named Glys.[18]

Glys is discovered to be a corrupted spren, which has no previous precedent amongst current Knights Radiant. Still, Renarin remains on his father’s side: he decides for himself - without the influence of his spren - to follow Dalinar’s tenets and be the man his family needs him to be.[19][20]

Unfortunately, Renarin (referred to only as " ... that Radiant" by Vstim) cannot heal Rysn's legs. She states that it's been too long since her accident, which she deems appropriate, that this is her consequence - payment for the contract she entered into willingly the moment she climbed down the side of the greatshell.[21]

As a Radiant, Renarin serves the people in turns of duty, transferring them through the Oathgate. As a member of Bridge Four, all he has ever wanted is to be treated like the rest of them.[13]

He thinks there might be a pattern to which gemstones were stored in which of Urithiru's library drawers. He insists he can find a pattern if he looks hard enough.[22]

As a Truthwatcher, Renarin must speak the Immortal Words of the Knights Radiant, which are a set of rules by which Radiants live. The First Ideal, identical for all orders of Radiants, is used as their motto. Each of the Radiant orders then had an additional number of Ideals that were unique to each order. For the Truthwatchers, these Ideals are as follows:

The First Ideal - Also known as the Ideal of Radiance.

Renarin greatly respects his father and thinks he is a great man.[citation needed]

Renarin doesn't like how his brother gets when he's around Sadeas.[12]

Conversely, he teases his brother for jumping in and out of relationships.[24]

He is noted to be quite close to Adolin and is not jealous of his brother even though he cannot fight. He greatly admires Adolin and wishes to be strong, and a good duelist like him.[citation needed]

Navani is called Mashala by Renarin as she is his favored aunt.[25]

They are quite close. Jasnah seems to be able to understand Renarin more than other people, and she really loves her cousin.

Later, she recognizes that the spren to which her cousin has bonded is a Voidspren, and she initially decides to kill him as a result. However, she relents when Renarin decides for himself (after he tells her that he 'saw' her kill him) - without the influence of his spren - to follow the tenets of his father and be the man his family needs him to be. She tells him that they will work it out together.[26][27]

Zahel acts as Renarin's swordsmaster for a time.[15] Zahel notes that he is quite fond of Renarin. Renarin shows a willingness to follow orders unlike other lighteyed boys.[citation needed]

*It has been stated by Brandon that Renarin is on the autism spectrum, albeit mildly.[28]

By the end of Words of Radiance, Renarin is twenty years old. 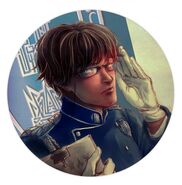 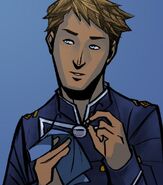 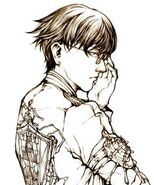 Add a photo to this gallery

Retrieved from "https://stormlightarchive.fandom.com/wiki/Renarin_Kholin?oldid=47532"
Community content is available under CC-BY-SA unless otherwise noted.