Adolin Kholin is a Brightlord, the elder son of Highprince Dalinar and Evi Kholin, Renarin's elder brother, and Dalinar's heir. Through his father, he is the nephew of the late King Gavilar and his then wife and queen, Navani, the cousin of his now queen, Jasnah, and former king, Elhokar. He is also a first cousin once removed to Elhokar's and his wife Aesudan's son, Gavinor,[1][2] as a member of House Kholin.

He is a full Shardbearer and inherited his Shardplate through his mother; he won his Shardblade through a duel with Tinalar.[3] He paints his Shardplate blue. Like his father, he is one of a dozen men who ride a Ryshadium horse. His horse, Sureblood, is described as completely white.[4] His father is training him as a leader, increasingly delegating visible and responsible military assignments to him.

Adolin has light blue eyes[5] and blond hair with black strands. The blond in his hair came from his mother. This is not considered to be truly Alethi because it is black-peppered blond in color.[6] This means that his mother was not of Alethi origin. (She was Riran.) Foreign blood in one's body results in stray hairs of another color on one's head.[7] His hair is often described as being a "stylish mess" or an unruly/messy mop.

A drawing of a young man in Shardplate performing sword forms may well be Shallan's depiction of Adolin.[8]

Adolin is described as having a handsome face and a captivating smile (according to Shallan).[citation needed]

Strong tempered and quick to act, he is infamous for his short yet numerous courtships.[4]

Adolin would happily spend his entire life dueling, lounging, and courting the occasional pretty girl. Of late, however, life doesn't seem content to let him enjoy its simple pleasures.[4]

He is a caring man who loves his brother and maintains deep respect for his father. He is willing to do what is right above what people think is right, and is shown to be easy-going and kind. He is also an over-achiever, a hard worker who seeks perfection and doesn't allow himself the right to make mistakes. He likes to be familiar with a large number of people, but not terribly close with any of them.[9]

Adolin is said to be a wonderful man, and about as deceitful as a newborn.[5]

Adolin never find hunts as interesting as everyone else says they're going to be. He doesn't care just how big the beast is because - in the end - he thinks it's really just butchery.[4]

Conversely, he thinks that dueling is exciting. The feel of the Shardblade in his hand, of facing someone crafty, skilled, and careful. Man against man, strength against strength, mind against mind.[4]

Adolin has grown up being quite secure with regard to where his place is and how high he stands in society. He has always been at the top of the food chain. Expecting to marry a young woman ranking slightly lower than him, he is nevertheless a flirting man with the ladies of his class, knowing how to "get them," make them laugh and interested. He wants to know how to "keep them."[10] But Adolin is " ... still young and not ready for a long term relationship. So, when a girl he is dating starts to get serious, he starts to pull away and thinks of a way to end it, even sabotage the relationship."[11] He also has a love of fashion.[12]

Still, Adolin is earnest, likable, and a master of the sword. He is truly capable in modern Alethi society, where how one moved among groups is even more important than strength of arm.[13]

When Adolin is born, his father names him "Adoda" - light, and "Lin" - born unto. (Hence the chapter title, "Born Unto Light.") A good name, traditional, full of meaning.[14]

The scents of horses remind Adolin of his youth. Sweat, and manure, and hay. He spent many of those days, before he was fully a man, on campaign with his father during border skirmishes with Jah Keved. Adolin had been afraid of horses back then, though he'd never have admitted it.[15]

The Way of Kings[edit | edit source]

Adolin at first believes that his father's prophetic visions are delusions and a possible sign of insanity. He worries about the talk in the warcamps that his father is turning cowardly,[4] and is jealous of his father's companions when he was earning his reputation as the Blackthorn. He was on the chasmfiend hunt when King Elhokar was unhorsed due to a damaged saddle girth and helped kill the beast.[16]

His father demands that he, along with the other officers in his company, follow the Alethi Codes of War. Adolin chafes at the restrictions but obeys his father in this and other matters. His Calling is dueling and he is an expert swordsman.[17] He could be a champion dueler if he wished it, but he refuses to partake in important matches in order to follow the Codes, as imposed by his father.[4]

Eventually, Adolin confronts his father and claims that following his father's visions is weakening their House and encourages his father to seek help.[citation needed] His arguments eventually lead Dalinar to doubt himself and consider abdicating the position of Highprince. When Adolin discovers this, however, he quickly repents and attempts to dissuade his father. When it is eventually discovered that Dalinar is indeed not going mad,[18] Adolin apologizes for not trusting him. Similarly (although, initially, Adolin complains about the strict Codes Dalinar emphasizes his army maintain), near the end of The Way of Kings, Adolin realizes the need for and value in following the Codes. He comes upon this realization when, after a night out with friends, he notices the differences in attitude between his father's officers and those of the rest of the Alethi armies.[citation needed]

Another notable mark of Adolin's character is his animosity towards Highprince Sadeas. Despite his father's continual claims to trust Sadeas, Adolin continues to despise him. When Sadeas confirms Dalinar's innocence regarding King Elhokar's assassination attempt, Adolin is noticeably surprised. Nonetheless, his mistrust of Sadeas is hardly appeased by this occurrence. After Sadeas's betrayal on the battlefield,[19][20] Adolin continues to tell his father "I told you so".

Adolin develops a dislike for Kaladin. During Szeth's first assassination attempt on Highprince Dalinar's life, Adolin sees Kaladin get cut with a Shardblade and grows suspicious when Kaladin survives both the wound and a fall out a window.[21] However, Kaladin later relates to Adolin that he also saw that Szeth had healed somehow when he and Szeth fell together.[10]

Adolin dedicated himself to defending his father, and helping him convince the other squabbling Highprinces of the true threat on the Shattered Plains. He gained some much-needed depth through his noble and deadly Shardblade battles - and his growing love for Shallan - as well as his grudging respect and friendship for Kaladin.[22]

At the end of the novel, the relationship between Kaladin and Adolin appears to be a budding friendship.[citation needed]

Afterward, while exploring Urithiru, Sadeas provokes Adolin into a fight, and Adolin kills Sadeas by stabbing him in the eye with a dagger.* Afterward, Adolin covers up his involvement by throwing Sadeas's Shardblade out a window, and leaves the scene of the murder.[24]

When Adolin takes his brother's hand in solidarity, a pulse of Radiance washes through him, and for an instant he sees himself perfected. A version of himself that is somehow complete and whole, the man he could be. Plus, his wrist is completely healed.[15]

Adolin is a full Shardbearer, which gives him super-human powers over normal fighters. Adolin is well-versed in the ten stances of Shardbearers, with Windstance being his most preferred, similar to his father, Dalinar.[citation needed]

He is an expert swordsman whose Calling is dueling. He is a genius with a Blade, an artist with paint of only one shade, striking expertly.[17]

In a duel against Relis, Elit, Jakamav, and Abrobadar, Adolin prevails, eventually with his brother's aid, though predominantly, Kaladin's assistance.[25]

To Adolin, Dalinar was the Blackthorn, a genius of the battlefield and a living legend. Together, his father and his uncle had reunited Alethkar's warring highprinces after centuries of strife. His father had defeated countless challengers in duels, had won dozens of battles. The entire kingdom looked up to him. So, Adolin didn't know just what a son could do when the father he loved - the greatest man alive - started to lose his wits.[4]

The Blackthorn was the very man he'd always wished he could fight alongside.[4]

Yet, if anyone could be able to go about intimidating forces of nature, Adolin knows that it would be his father.[27]

Though he is concerned for what he deems to be his father's worsening condition, Adolin tries to be relaxed and confident for Renarin. Generally, this isn't difficult.[4]

Adolin has always felt protective of his younger brother, yet fears for him when he inserts himself within a duel unequipped.[25]

Initially, Adolin looks down upon Kaladin, calling him bridgeboy.[28] Later, after Kaladin fights to defend him,[25] Adolin develops respect for him.

When Kaladin saves his father, Adolin is delighted.[29] The discovery of a powerful magic-user during terrifying events who is on his side is all for the good.[24]

Adolin is initially attracted to her for her stunning appearance (i.e., her red hair, pale skin and slender build, very different from Alethi women).[30] She knows of the causal betrothal Jasnah has suggested while he does not. Although initially he was still somewhat flirtatious towards other women, an interesting conversation regarding Shallan's question about what if one needs to poop in Shardplate[31] made him notice Shallan even more, and his flirting stopped.

Adolin appears to like Shallan a lot, and at times he's unsure of their relationship status, especially after he finds out that Shallan is one of the Knights Radiant. He regretted not going to Shallan when the bridge collapsed during Words of Radiance, and swore to protect her the next time instead of going straight to Dalinar, which Shallan refused vehemently, due to her having been locked away when she was younger.[32]

When Shallan saves his father's army, Adolin is delighted.[29] The discovery of a powerful magic-user during terrifying events who is on his side is all for the good, even if he feels a little awkward when he sees Shallan a couple hours later.[24]

Five days later, though, it's clearly been on his mind throughout the work of exploration and resettlement. Though he might not have ever felt patronizing toward her, despite his awareness of the difference in their social status ... if anything, he deliberately ignores the difference because he finds her to be so fascinating.[24]

Adolin calls his aunt Mashala,[34] but believes that she can be overbearing sometimes.[31] He sees a thawing in her coldness, however, as she seems more thoughtful than before regarding Shallan.[25]

*According to Brandon, Adolin doesn't view what he did as murder. His father is uncertain if it is. And, his father is the ultimate judge of legality. Still, there will be far-reaching implications for this.[35]

By the end of Words of Radiance, Adolin is 25 years old. 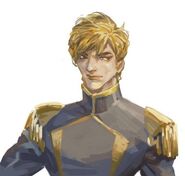 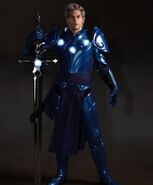 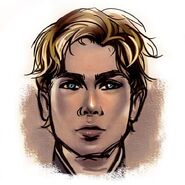 Add a photo to this gallery

Retrieved from "https://stormlightarchive.fandom.com/wiki/Adolin_Kholin?oldid=51188"
Community content is available under CC-BY-SA unless otherwise noted.